In normal times, school community is all about families, children and educators partnering intentionally for collective support. It’s about defying the notion that we must carry the weight of raising families on our own, and instead recreates the proverbial village where we can meaningfully help one another grow alongside our children.

But what is the role of a school community when the world around us is upended? When Texas got hit by a historic winter storm, in February, Guidepost Montessori schools in the state discovered just how pivotal community can be.

Through a time of crisis when millions of residents lost power and access to running water, Guidepost staff and families banded together to ensure the necessities of shelter, warmth, water and food were being met, while also ensuring continuity of care and education for students by offering campus transfers, home learning pods, and virtual school.

From bad to worse

Beth Sharkey, a Guidepost parent based in Austin, Texas, never imagined how deadly the storm might become.

“We didn’t think it would be that serious,” she recalled. “When it started sleeting heavily, everything began closing, including our son’s Guidepost school. Every time we thought we would be turning a corner, the weather just kept coming... There was a lot of uncertainty.” 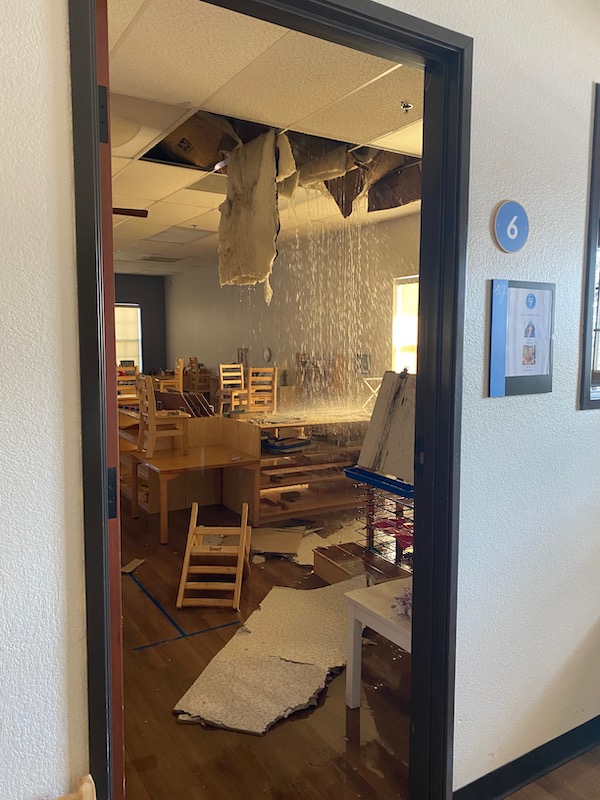 Uncertainty morphed into imminent danger as the storm’s extreme conditions froze over the ill-prepared state. The initial snowfall in the second week of February turned into massive power outages, resulting in wiped out grocery shelves and boil-water notices for the remainder of the month. Frozen pipes burst, adding flooding and costly damages to homes and buildings.

For Guidepost Montessori, which has a dozen of its early childhood and elementary campuses in Texas, initial school closures could have turned into long-term closures—but that just didn’t sit right with school staff, who started checking in on their colleagues, enrolled families, and getting out to their campuses to assess damage even while the roads were still iced over. Three campuses—two in Austin and one in Dallas—sustained considerable damage from burst pipes, including the campus that Sharkey’s three-year-old son attends, Guidepost Montessori at Brushy Creek.

“I remember getting to a point where we felt incredibly stressed, and we thought we'd have to brace for a month without childcare, bringing us right back to the onset of COVID. We know kids are resilient, but, man, this was one more thing for our son to navigate after a year of so much transition,” Sharkey said. “Then, instead of notifying us of a closure, they said that they’d be ready to have us at a different location that Monday. I was tearing up.”

Sharkey’s son, Lucas, was among 95 new children who showed up for school that Monday at Brushy Creek’s sister site, Guidepost Montessori at Round Rock, which escaped the storm’s wrath and could safely operate. More than 20 staff and parents had volunteered their weekend to transfer Brushy Creek’s early childhood program over to the undamaged Round Rock location, moving furniture and learning materials into six different spaces. 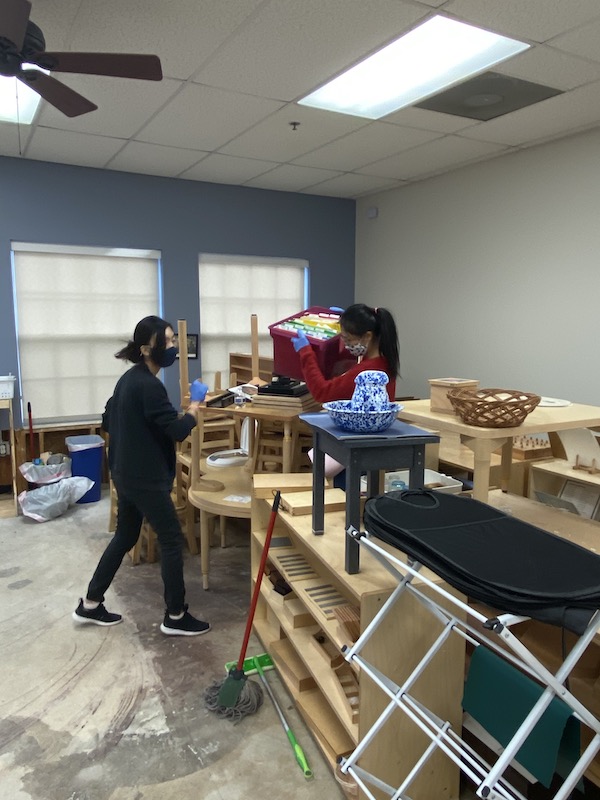 Volunteers helping to move supplies from Brushy Creek to Round Rock

“Round Rock had the space to accommodate our families,” said Emily Sullivan, Assistant Head of School at Brushy Creek. “After we set up the rooms that weekend, I emailed families explaining that every room will have their same friends, same teachers, just in this new location. The response was overwhelming, and my inbox was full of gratitude.”

Merging the two campus communities did more than maintain consistency for the children; it aggregated the supply of much-needed food, water and warmth for many parents and staff who were dealing with rolling power outages and boil water notices at home. Megan Martinez, Head of School at Round Rock, said their school cook, Carl “Russ” Pruett, made it his personal mission to ensure that he could find enough food to cook for every child.

“Our cook has been amazing,” Martinez said. “He cooked for an extra 100 children after cooking for only about 50 children before the merge. He went store to store until he found enough ingredients so that parents wouldn’t have to worry about providing food—not an easy task, considering how wiped out the shelves were.”

The cook at Guidepost Montessori Round Rock

“We have come out as a stronger community not only with our parents, but with each other as colleagues,” Martinez said.

While the campus merge was underway, others at Guidepost Montessori at Cypress Creek formed at-home learning pods via Guidepost at Home. The at-home program transfers Guidepost’s Montessori curriculum out of campuses and into “host homes,” in this case allowing students to continue learning while the campus closed for repairs. Half of Cypress Creek’s 64 families formed learning pods, which were set up in 24 hours after interested families were matched, each under the support of an in-home guide.

“Parents have been really patient, resilient and understanding,” said Cypress Creek Head of School, Shavonda Lawson. “For those not in pods, we were also able to launch a Toddler virtual session daily and a Children's House session, supported by our lead guides.”

How are we showing up for each other?

The Austin-area Academy of Thought and Industry (ATI), an extension of the Guidepost network for middle and high school students, was also impacted by the storm. ATI Regional Head of School, Julia Richards, walked four miles in the snow to seek shelter after her home lost its power for several days during the frigid temperatures. Once she got her bearings, she recalls a moment of motivation in which she felt called to do something tangible that could connect Guidepost and ATI families in the region.

“I asked myself, how are we showing up for our families and offering support outside of re-scheduling classes?” said Richards. “I talked to colleagues, and by the end of the day, I’d created a survey that we sent to families in the region asking what they needed.”

Immediately, they received nearly 40 responses. The majority of families were offering support, with only a few indicating that they were in need of water and other pantry staples. Richards quickly pivoted to help match those in need with those who’d offered to help, and the families took it from there.

Volunteers banding together in the Guidepost community

Beyond matching families, staff were able to open their Guidepost campuses as community hubs. The network’s school operator, Higher Ground Education, launched a Community Stockpile, which funded and delivered resources like water, toilet paper, snacks and food, so that campus teams could access and extend more support to local families.

At this point, school community backed by true Texan hospitality morphed into a force to be reckoned with.

“The major bright spot I have seen is how our parents and staff have come together, many even offering to open up their homes,” said Quala King, Head of School at Guidepost Montessori at Flower Mound.

These offers were by no means outliers. One after the other, a regional staff group chat began overflowing with generosity:

“Good morning! I reached out to a couple of you already yesterday and no takers yet, but we'd like to offer our spare bedroom for anyone that has no heat. Our house is small, but still warm.”

“When my power went out at the start of this storm, half of our staff offered up their houses not just to me but also both my boys and both dogs.”

“We had a parent offer to step in at circle time if the guides had lost power.”

“We have a guide who went with her husband to check the school. She made sure the faucets were dripping and the plants were watered. We also have staff that have opened their homes to neighbors without power or water.”

While warmer temperatures would soon facilitate a return to normalcy, one family in the ATI school notified Richards that the unthinkable happened—they lost their home.

“One of the hardest hit families that we are working to rally around is one of our high school students, Ava and her mother Juli, who completely lost their home, their belongings, everything,” Richards said. “Initially, they stayed with another ATI student and family, but we are all still rallying around this family and identifying needs, gathering donations.”

The family, which has an active GoFundMe that is moderated outside of the school community, has raised more than $12,000 in financial support as of March 12. Donations are still being collected, and those interested and able to help can do so here.

These moments of hardship remind us of the power of community, and in the case of our schools, just how vital it is for places of learning to be active sources of guidance and light. Schools are more than physical places of learning; they are bridges where parents, children and educators come together in pursuit of higher ground—sometimes in the most basic sense of survival—in order to provide the building blocks we need for a better tomorrow.

“There are moments when I think people sometimes look at a big school like Guidepost, and question whether they want to be involved in a network of our size and scope, where we have a lot of campuses and programs,” said Jennifer Goodman, Head of School at Brushy Creek. “This was a moment where we all saw it come together. Where the power of innovating, scaling, and living up to our mission of making Montessori education as accessible as possible, makes sense. We are stronger together, and that is the positive thing that I think most clearly came out of something so difficult.”

Guidepost Montessori provides authentic, child-centered education for children ages 0 to 12. With over 80 campuses across the US and Asia, and at-home and virtual learning programs serving more than 5,000 families worldwide, Guidepost is the world’s largest Montessori network.

There are now Guidepost Montessori schools across the country, so we may have a school that's enrolling near you. Head to a campus website for more details!

We're always looking for new locations. Let us know you're interested in Guidepost and we'll take a look at your neighborhood.

Bring Guidepost To Me

We've received your submission and will be in touch.

Want to stay in the loop about Guidepost?